Window on the world

My search for images that inspire emotion has taken me to many places where music is the lifeblood of a people. The most productive have been Havana and Buenos Aires, cities in the New World where a confluence of cultures created fertile ground for exciting and enduring musical traditions to flourish. Often it starts with a clash amidst hardship – in Cuba the romance of the Spanish guitar met the passion and driving rhythm of an African drum, at first in conflict and then combining to produce a new and exciting hybrid.

I had last been in New Orleans in the 1980s and now I was back in search of the spirit of this musical mecca. A mixed French and African heritage shaped by America gives the city a unique feel, an independent state of mind and a love for all things brass. Trumpets, trombones and driving vocals, that talk of both struggle and celebration, are the base of the New Orleans jazz tradition so popular around the world.

My photography is a restless occupation. A wandering from locale to locale looking for something beyond reach, often with a feeling of unrequited yearning that denies sleep or rest. It is a journey of learning that develops my understanding over time through long hours of sitting and watching and walking. Undoubtedly pleasurable but also peppered with elements of pain for the missed opportunity or the lost shot. Also perhaps, on this particular journey, for the lost history… I worried that in the intervening years the vibrant, cultural richness of New Orleans may have disappeared in the devastation and displacement of Hurricane Katrina, and that in its place I would find the all-consuming homogenizing effects of corporate America.

My first destination was the infamous Mother-in-Law Lounge. Owned by local jazz trumpeter and legend, Kermit Ruffins, the bar sits below an overhead freeway. Its painted exterior an island of colour in an otherwise drab neighbourhood. The interior is dark, the drinks heavy on the pour. Kermit was playing with his band, chatting between songs before losing himself to his horn. His daughter Keshia sang a melodious set, and then the debonair trumpet player Mario Abney took us into the early hours. I was entranced. The lighting for photographs was almost non-existent, but I was here. 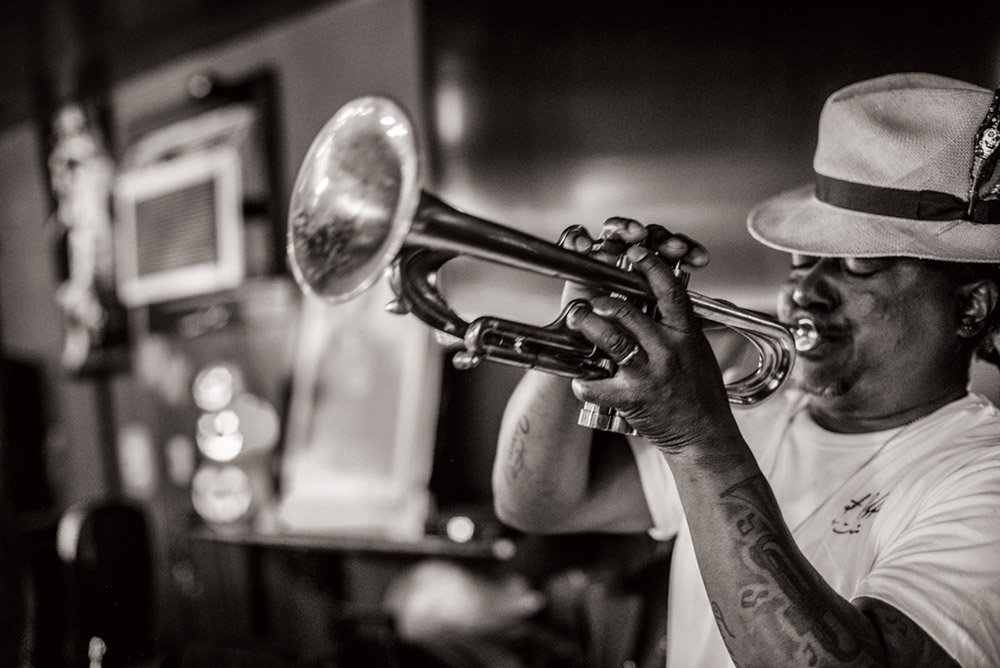 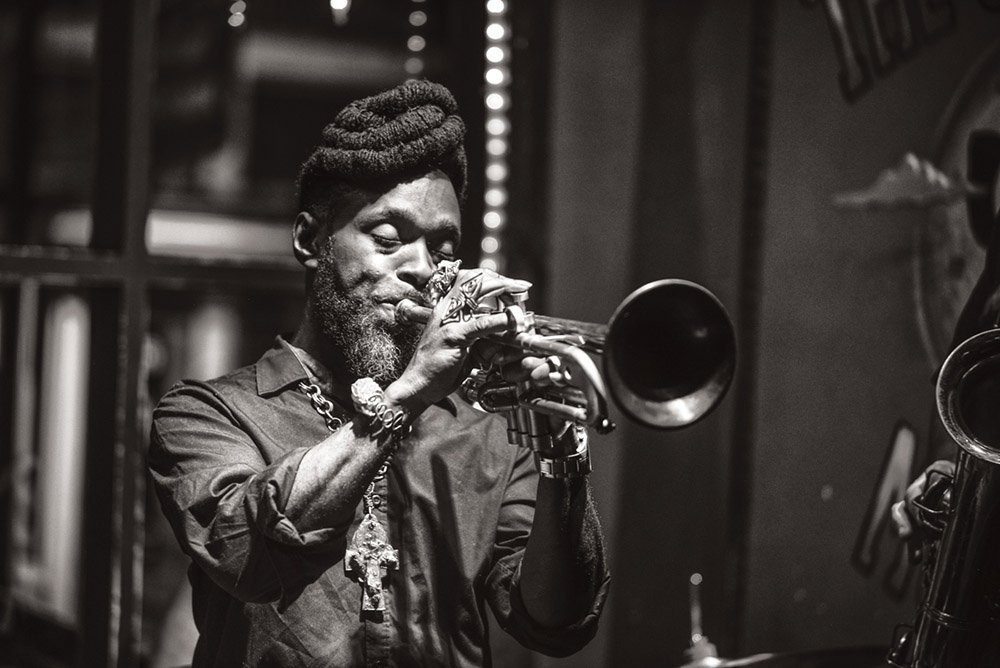 The next day I headed to Bourbon Street, home of the Hurricane cocktail and, it seems, the hen party. Loud and disappointing, soulless in the home of soul… boutiques and bars a plenty but nothing to draw me in.

My online research suggested that I head to Frenchmen Street on the periphery of the French Quarter. Bars like the Spotted Cat Music Club, d.b.a and Bamboula’s beckoned… jazz bands playing from early afternoon for tips from the tourists. Moments of passion and emotion were undeniable but fleeting, and so began the days of wandering back and forth, waiting and searching and hoping to be in the right place at the right time. Memories abound. Late one night I heard the raucous vocals of Glen David Andrews in the Royal Frenchmen Hotel Bar. A place so small that barely 20 people could squeeze in and yet Glen sang with an energy and power that was mesmerizing. Outside on the street the Young Fellaz Brass band produced a wall of sound – playing their battered instruments for all they were worth. On the last night I found myself at a jam session – everybody in the building seemed to be a musician – soaring female vocals, a scream of jazz trumpets – a New Orleans for the modern age, alive and well. 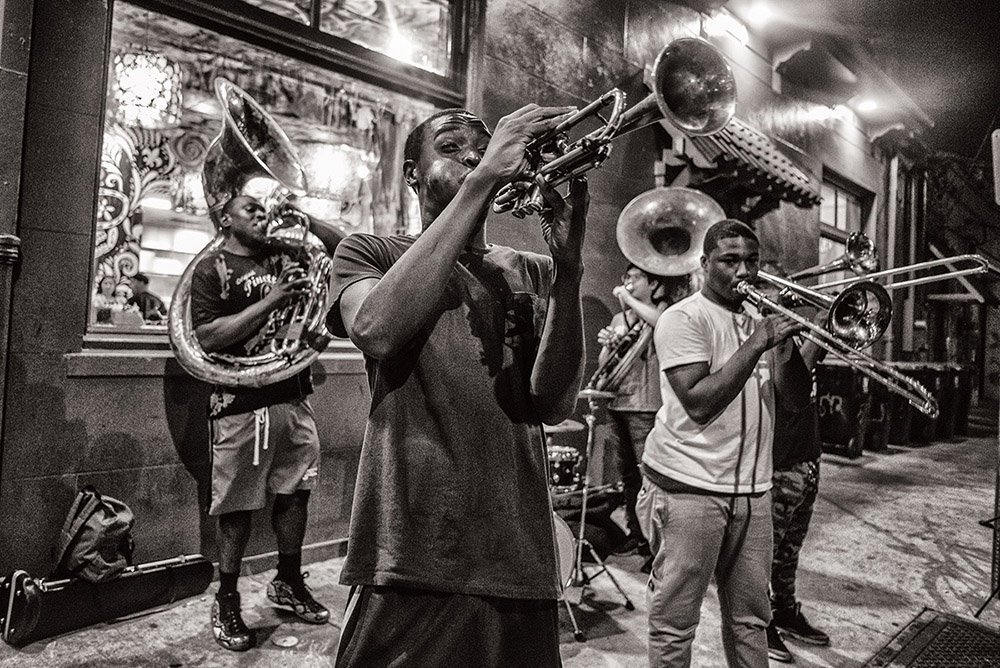 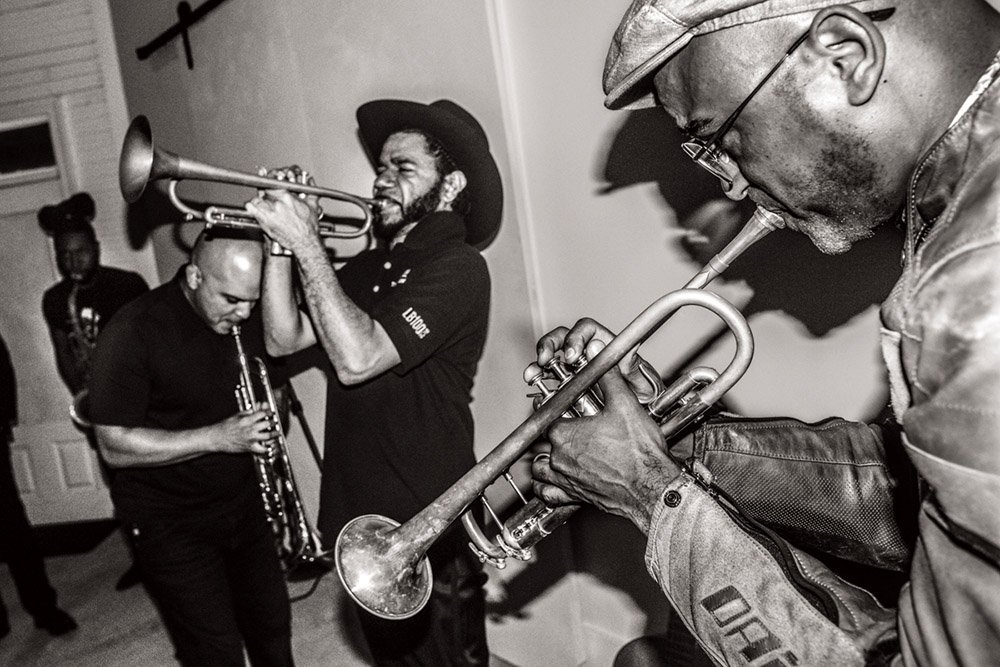 There is no guarantee of success to what I do, no magic bullet in capturing an image that transcends the personal experience. I have the memory of the sounds, the drinks, the atmosphere to give my own colour to my black and white prints. The elements that give it meaning to somebody who was not there are harder to define. The moment has to be real I believe, the subjects lost to their own emotions, the juxtaposition of foreground and background just right, an element of dynamism perhaps.

But in the end it is the sensitivity of the viewer and their own personal history that matter the most. The beauty, as ever, is in the eye and the soul of the beholder.

Serenity in the Swamp.... By James Sparshatt curre

A portrait by Gabrielle Pool inspired by journeys

Congratulations to Monica Denevan for her award wi

Exciting today to start hanging the gallery for re

A huge congratulation to Monica Denevan for winnin

Fellaz on Frenchmen. The Nola spirit captured by

John Kenny's portraits from Africa - these all fro

John Kenny at work in a Turkana community in Octob

The captivating Black and white photography of Jam

Gloria and other bronzes by Nando Kallweit at the

Belief. A portrait of a young Turkana woman in nor