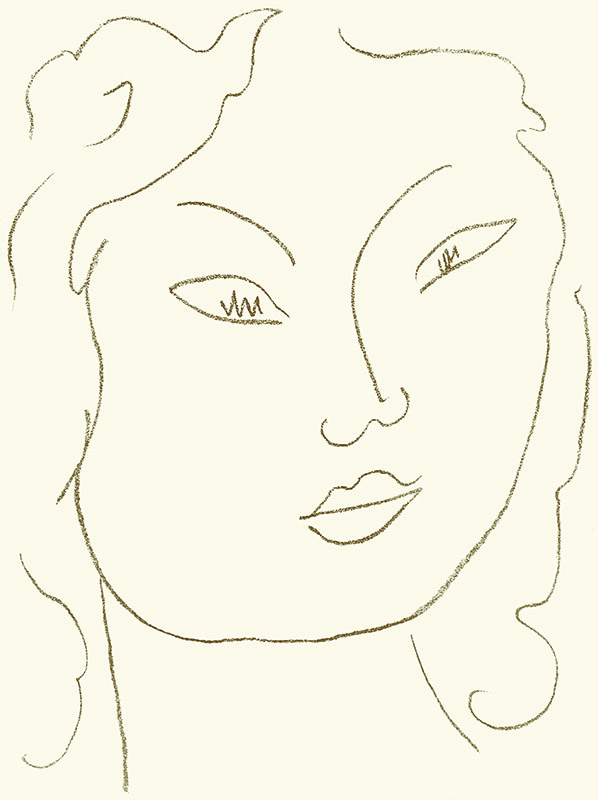 Poésies Antillaises is a beautiful example of the extraordinary gift for drawing, the ability to incorporate and to express so much through line reduced to its simplest form, which was one of Matisse’s greatest legacies to 20th century art.

In 1945, following the success of his series of lithographs under the titles Visages, inspired by Reverdy’s poetry, Matisse began working with several exotic models, mostly Polynesian, to prepare illustrations for an ambitious suite of lithographs that he hoped to do in homage to his friend, the poet John-Antoine Nau.
Nau’s poetry took its themes from voyages in the Antilles and in particular to Martinique where the facial sculpture of women from the Islands, with their exoticism and richness, was a great inspiration.

Matisse completed and proofed all the stones for the Poésies Antillaises series in 1945-46 which, in a letter to Mourlot, he called striking and superb. However for some reason the actual edition of the album was not pulled at that time. The work was finally published in 1972 by the Paris lithographer Fernand Mourlot, who scrupulously followed both Matisse’s maquettes and his final corrected proofs.

Make an email enquiry
Contact us
Back to Matisse art works